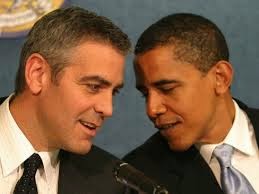 Via The NY Daily News:


If you haven't heard, George Clooney is a huge supporter of President Barack Obama.Hotel-casino developer Steve Wynn may not have been aware just how much Clooney backs the Prez, but he quickly found out after calling Obama an "a--hole," reports the Las Vegas Review-Journal."He called the President an a--hole … that is a fact," the 52-year-old actor said in a statement about the heated words they exchanged during a recent dinner at Botero restaurant inside Wynn's Encore hotel in Las Vegas."I said the President was my longtime friend and then he said, 'Your friend is an a--hole,'" he continued. "At that point I told Steve that HE was an a--hole and I wasn't going to sit at his table while he was being such a jacka--. And I walked out."