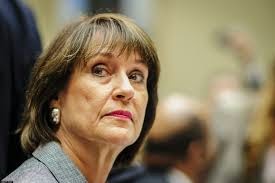 We know Lois Lerner targeted conservatives and the Tea Party while at the IRS. We also know she appeared to collude with the FEC to target conservatives. Now, we are finding out Lerner colluded with the DOJ in a failing attempt to get conservatives prosecuted. Anyone who would use the power of at least three federal agencies to silence patriots is pure evil. This is why Lois Lerner should not have been given immunity from prosecution when she took the fifth before Congress. Lois Lerner needs to go to prison.

According to new IRS emails obtained through a Freedom of Information Act request from Judicial Watch, former head of tax exempt groups at the IRS Lois Lerner was in contact with the Department of Justice in May 2013 about whether tax exempt groups could be criminally prosecuted for "lying" about political activity.