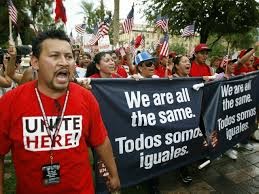 I trust Boehner and other Republican leaders about as far as I can throw them...


WASHINGTON—Speaker John Boehner and other senior House Republicans are telling donors and industry groups that they aim to pass immigration legislation this year, despite the reluctance of many Republicans to tackle the divisive issue before the November elections.
Many lawmakers and activists have assumed the issue was off the table in an election year. But Mr. Boehner said at a Las Vegas fundraiser last month he was "hellbent on getting this done this year," according to two people in the room.
A spokesman for Mr. Boehner didn't dispute the account but said no action is possible until President Barack Obama proves himself a trustworthy partner to Republicans.
Rep. Bob Goodlatte (R., Va.), chairman of the HouseJudiciary Committee, delivered an upbeat message about legislative prospects during a recent trip to Silicon Valley, said Carl Guardino, chief executive of the Silicon Valley Leadership Group, who hosted his visit.