Lois Lerner’s Lawyer: Holding Her In Contempt of Congress Would Be “Un-American” or Something… 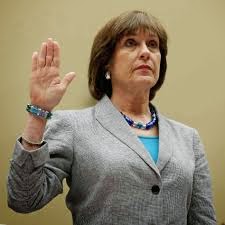 “Un-American” is when you use the power of the IRS and other government agencies to target someone because you don't agree with them politically. Lois Lerner is likely the one who is “Un-American.”

A lawyer representing former Internal Revenue Service official Lois Lerner is requesting a chance to plead her case against a planned House vote to hold her in contempt of Congress.
On Friday, Majority Leader Eric Cantor said in a memo to members that the House of Representatives would vote in May to hold Ms. Lerner in contempt of Congress over her refusal to testify before a congressional committee about IRS targeting of conservative groups. Ms. Lerner headed the division that handled the groups’ applications for tax-exempt status, and is at the center of congressional investigations.
Ms. Lerner has twice declined to testify before the House Oversight and Government Reform Committee, citing her Fifth Amendment privilege against self-incrimination. GOP lawmakers argue that she waived her privilege by making a statement at the first hearing, professing her innocence of any wrongdoing.
They were further angered when it became known that Ms. Lerner gave a lengthy interview to the Justice Department about the matter. The committee approved a contempt resolution concerning Ms. Lerner earlier this month.
Ms. Lerner’s lawyer, William Taylor III, said on Monday in a letter to GOP leaders that holding Ms. Lerner in contempt of Congress “would not only be unfair and, indeed, un-American, it would be flatly inconsistent with the Fifth Amendment as interpreted by the Supreme Court.”