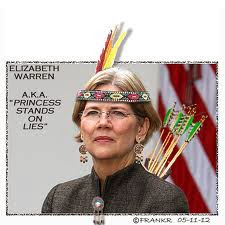 Senator Elizabeth Warren (D-MA) repeats her false claims of Native American ancestry in her new book, A Fighting Chance, which is scheduled for release next Tuesday.
“As a kid, I had learned about my Native American background the same way every kid learns about who they are: from family,” Senator Warren writes in an excerpt published Wednesday in the Boston Globe.
Senator Warren then repeats a line she used often in her 2012 Senate campaign, memorialized in a September 2012 television commercial, writing “I never questioned my family’s stories or asked my parents for proof or documentation. What kid would?”
“Knowing who you are is one thing, and proving who you are is another,” Warren writes.
Keep on reading…