Cocky: Hillary Clinton talks about her two terms in the White House... 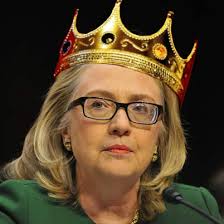 Should we just call off the election and have a coronation for Hillary?


Hillary Clinton isn’t just ready for 2016—she’s ready for 2020, as well.
Clinton referenced her plans for “two terms as president” during a campaign stop Wednesday in South Carolina, where she outlined her economic goals.
“I hope that at the end of my two terms as president, I will have overseen an even bigger peacetime expansion of the economy than my husband did,” Clinton said, according to Time.
“He had the biggest peacetime expansion in our history.”
Clinton, the clear frontrunner for the Democratic nomination, currently leads all major Republican candidates in general election polling, according to a RealClearPolitics average.
Clinton is set to announce a proposal to provide businesses that hire apprentices with tax credits in the hopes of lowering youth unemployment during a roundtable Wednesday afternoon in the Palmetto State.