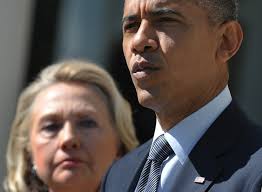 The contents aren't classified. They just don't want you to know what they discussed. This could be when they conjured up the YouTube video lie...


New documents released by a federal court show President Obama called then-Secretary of State Hillary Clinton on the night of the 2012 Benghazi attack -- but the contents are being withheld by the State Department.
It had previously been disclosed that Clinton and Obama spoke the night of the terror attacks. But the documents offer additional information about the timing of the call -- after the initial attack on the U.S. consulate, but before the second wave where mortars hit the nearby CIA annex and killed former Navy SEALs Ty Woods and Glen Doherty.
The contents of the call, however, are being withheld, not because the information is classified but because the administration claims they represent internal deliberations about the 2012 terror assault.
The claim comes as Clinton also faces accusations that she withheld Benghazi-related emails from her private server in the trove of emails handed over to the State Department.