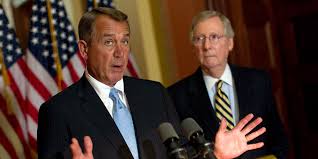 Boehner and McConnell are an embarrassment to the Republican Party...


President Obama signed hard-fought trade legislation Monday, thanking Republican leaders who helped get it done and saying the package will “reinforce America’s leadership role in the world.”
“I think it’s fair to say that getting these bills through Congress has not been easy,” Mr. Obama said as he signed the trade bills into law in the East Room. “They’ve been declared dead more than once.”
The two major pieces of legislation grant Mr. Obama “fast track” trade-promotion authority, which allows the president to negotiate a deal and submit it to Congress for an up-or-down vote without the chance for amendments, and expand aid for American workers who lose their jobs due to foreign competition. Members of both parties attended the bill-signing ceremony, although Speaker John A. Boehner of Ohio and Senate Majority Leader Mitch McConnell of Kentucky did not, with Congress on its Independence Day recess.