There is a lot of buzz about this PEW poll that found 56% of Republicans favor granting legal status for people in the U.S. illegally.  They asked for the youngest adult at homes with a land line. In other words, they wanted to talk to the 20 something slackers still living with their parents. Additionally, 6.6% of respondents were foreign born. The survey is also heavy on cell phone users who tend to be younger.Don't believe it.


Interviews were conducted in English and Spanish. Respondents in the landline sample were selected by randomly asking for the youngest adult male or female who is now at home. Interviews in the cell sample were conducted with the person who answered the phone, if that person was an adult 18 years of age or older. For detailed information about our survey methodology, see http://www.pewresearch.org/methodology/u-s-survey-research/ 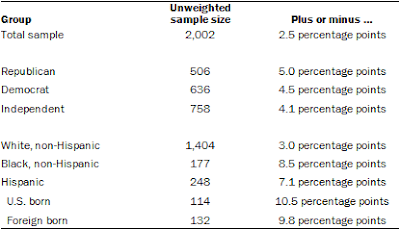