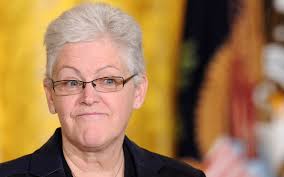 I thought it was liberals who weren't normal people...


EPA Administrator Gina McCarthy told an audience Tuesday gathered at a White House conference “normal people,” not “climate deniers” will win the debate on global warming.3
McCarthy’s remarks came as she was talking about the reasons why the EPA put out a report on the negative health impacts global warming will have on public health. She said the agency puts out such reports to educate the public, not answer critiques from global warming skeptics.1
“I am doing that not to push back on climate deniers,” McCarthy told doctors, health professionals and others gathered at a White House summit. “You can have fun doing that if you want, but I’ve batted my head against the wall too many times and if the science already hasn’t changed their mind it never will.”1
McCarthy then remarked how “normal people,” and not skeptics would eventually win the global warming debate. Implicit in her remarks is the contention that skeptics are somehow not “normal people.”What do you think?