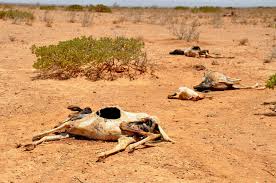 
Climate change means rain is returning to previously drought-stricken areas of Africa exactly 30 years since Live Aid raised £150million to help starving people there, a new study has revealed.
A severe lack of rainfall during the 1970s and 80s led to a persistent drought and famine, killing more than 100,00 people in countries such as Ethiopia.
The crisis prompted singers Sir Bob Geldof and Midge Ure to organise the Live Aid concerts in July 1985 to raise cash for the relief fund.
But now research by scientists at the National Centre for Atmospheric Science at the University of Reading, has shown how increased greenhouse gases in the atmosphere, which have caused climate change, have triggered a return of crucial seasonal rains to the Sahel region.