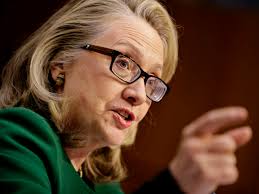 Obama never released his. He released a statement from his doctor saying he was healthy enough to be president.


On Sunday, Hillary Clinton’s campaign manager would not commit to releasing her health records during the 2016 campaign.
Face the Nation host John Dickerson pointed out that “Hillary Clinton had a big health scare when she was secretary of state” and asked campaign manager Robby Mook, “will she release her medial records as part of this campaign?”
“I will let Hillary decide that,” Mook answered. “But I can tell you she has been hitting the campaign trail hard.”
In 2012, Clinton had to delay her Benghazi testimony to Congress after she fell and suffered a concussion. She later was treated for a blood clot in her brain, which experts said could have been “life threatening.” Though Clinton joked about her “cracked head” in emails that the State Department recently released, Bill Clinton revealed last year that Hillary’s injuries “required six months of very serious work to get over.”