Game Labs refuses to modify Ultimate General: Gettysburg because it is historically accurate... 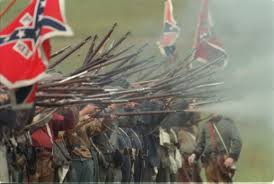 I wouldn't fly the Confederate Flag on state capital grounds, but we shouldn't try to revise accurate history.


As you may have been already informed (Read Facebook link), Apple has removed our game from AppStore because of usage of the Confederate Flag. Ultimate General: Gettysburg could be accepted back if the flag is removed from the game’s content.
We accept Apple’s decision and understand that this is a sensitive issue for the American Nation. We wanted our game to be the most accurate, historical, playable reference of the Battle of Gettysburg. All historical commanders, unit composition and weaponry, key geographical locations to the smallest streams or farms are recreated in our game’s battlefield.
We receive a lot of letters of gratitude from American teachers who use our game in history curriculum to let kids experience one of the most important battles in American history from the Commander’s perspective.
Spielberg’s “Schindler’s List” did not try to amend his movie to look more comfortable. The historical “Gettysburg” movie (1993) is still on iTunes. We believe that all historical art forms: books, movies, or games such as ours, help to learn and understand history, depicting events as they were. True stories are more important to us than money.
Therefore we are not going to amend the game’s content and Ultimate General: Gettysburg will no longer be available on AppStore. We really hope that Apple’s decision will achieve the desired results.
We can’t change history, but we can change the future.
The Game-Labs Team