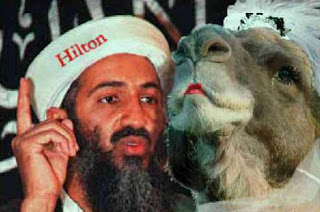 If this doesn't bring Obama Bin Laden out of the cave he has been hiding in since 9-11, nothing will.

Nearly 20,000 camels from the UAE and other Gulf Arab countries have converged on Abu Dhabi’s western region for one of the world’s largest camel beauty contests involving prizes worth nearly Dh35 million.

The camels have been brought from various parts of the UAE as well as neighbouring Saudi Arabia, Oman, Kuwait and other Gulf nations for the week-long beauty competition in the western town of Dhafra.

The contest, which started on Thursday, will stretch until next Friday and officials described it as one of the largest camel beauty pageantry events in the world...