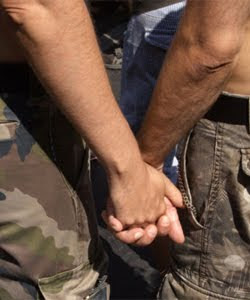 Liberals have long plotted to destroy our military. They have tried unsuccessfully to defund it for years. Having failed at that strategy, they are moving to destroy it from within by repealing DADT. The bill has already passed the House and, now, passed Cloture in the Senate. It will be on President Obama's desk sometime next week. Nearly 60% of combat troops oppose the change. After the combat experience and leadership opts out of reenlistment, our capability to win in Afghanistan or any other conflict is greatly diminished.

(NPR) — In a landmark vote for gay rights, the Senate on Saturday voted to advance legislation that would overturn the military ban on openly gay troops known as “Don’t Ask, Don’t Tell.”

The 63-33 test vote all but guarantees the legislation will pass the Senate, possibly by day’s end, and reach the president’s desk before the new year.

Many point to the fact Isreal has a good military and Israeli's allow openly gay soldiers to serve. This is true. However, Israel is a country the size of a postage stamp and many military go home at night. They don't normally face a year or more of deployment to the field in a country such as Iraq or Afghanistan.
Posted by Bluegrass Pundit at 12:09:00 PM