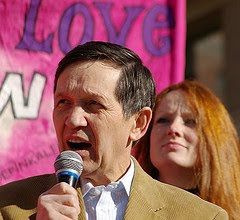 I am going to really miss this moonbat.


(CNN) – The state of Ohio will lose two congressional seats thanks to the latest U.S. Census figures, and liberal stalwart Dennis Kucinich is worried his seat is on the chopping block.

In an e-mail to supporters Wednesday, the seven-term Democratic congressman and two-time presidential candidate says the Republican-controlled Ohio legislature is likely to eliminate his heavily Democratic Cleveland-area district.

But Kucinich says he’s not just going to stand by while that happens...