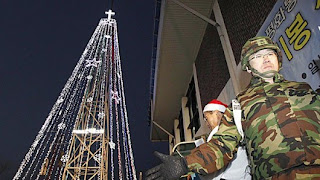 
South Korea has lit a massive steel Christmas tree that overlooks the world’s most heavily armed border and is within sight of North Korea, prompting threats of attack from the communist state …

North Korea, officially atheist and with only a handful of sanctioned churches in Pyongyang with services for foreigners, warned that lighting the tree would constitute a “dangerous, rash act” with the potential to trigger a war.