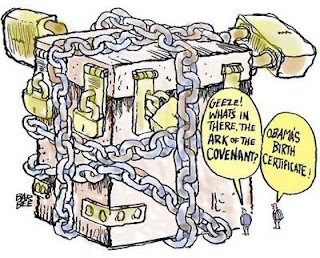 The Arizona legislator has passed a bill requiring candidates to prove eligibility. This will be the first such law in the nation, but several other states are considering legislation. Will GOP Gov. Jan Brewer sign it into law? I believe she will. President Obama hasn't done her or Arizona any favors lately.


PHOENIX (AP) -- The Arizona Legislature gave final approval late Thursday night to a proposal that would require President Barack Obama and other presidential candidates to prove they are U.S. citizens before their names can appear on the state's ballot.
Arizona would become the first state to require such proof if Gov. Jan Brewer signs the measure into law.

The GOP is like the "Chicken Littles” always saying that the “Sky is Falling”, like the same ones that were the “Chicken Hawks” ("W" Wars), big talk no courage. The United States, favors creativity wherever it can be found. We're apostles of prosperity and defenders of the free exchange of ideas and when more people in more countries are free to rise, to invent, to communicate, to dissent, it's not the doom of United States leadership, its the triumph of the American way.
Generations have worked hard and sacrificed much for the country to reach this point (individuals and our unions!), and with further hard work and sacrifice (along with our relentless self-doubt) the United States will rise again, we do not tire and we are coming back, no matter what the “Chicken Littles” keep saying about our nation. Never Bet Against the United States!
Our current President travelled under a USA passport long before he was elected President, but I guess the quacky BIRTHERS, must believe that the USCIS – United States Passport was in on the lie, please, grow up, you are wrong! Remember when some contractors were busted during the “George W. Bush” administration for looking at our current President passport file (how quick you forget).
http://swampland.blogs.time.com/2008/03/20/obamas_passport_files_hacked/

The majority of the voting public ask “where the proof”, show some proof BIRTHERS or the voting majority will continue to see you as dumb, stupid or racist, maybe all three. Can you blame them?

Still, I really hope one of these retreads and blowhards runs for president, not because they have a chance of winning but because I like to see the train wreck that they will cause.

I Finance Myself:
real estate celebrity developer, Donald Trump, “I took my Casino into Bankruptcy, just imagine where I can Take the US”
former Massachusetts Gov. Mitt Romney “The Flip-Flopping Fudger”,
former Florida Gov. Jeb Bush “The I Am Not My “Dumb Ass” Brother”,

The cartoon is great, but they forgot the armed guards. (snark)