CBS Poll: 43% of Americans have doubts about where Obama was born

43% of Americans have doubts abut where Obama was born. That number includes 25% who don't believe Obama was born in America and 18% who aren't sure where he is born. The mainstream media would like you to believe only Republicans and Tea Party members have doubts about Obama's official nativity story. In an obvious attempt to hide the fact many Independents and Democrats are included in this number, CBS failed to completely break down the political affiliation for this poll. The rest of the poll had the demographics broken out by Republican, Democrat and Independent. Since CBS polling only believes 25% to 30% of Americans are Republicans, it is a safe bet several Independents and Democrats have their doubts too.The CBS poll can be viewed here. 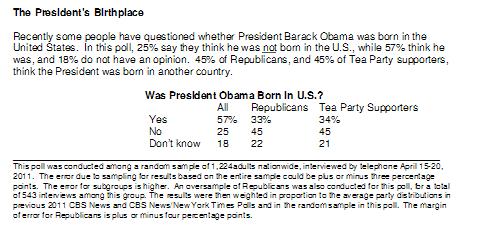