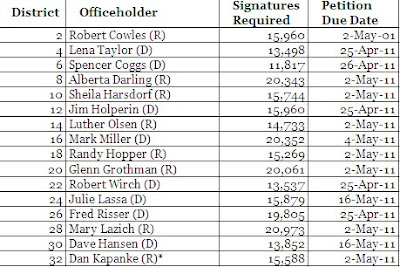 Last week a group trying to recall Wisconsin Democratic State Senator Dave Hansen because he fled the state instead of doing his job and voting on a bill to restrict public employee bargaining rights announced they had enough signatures on a recall petition to get the ball rolling. This week, their office is broken into and recall petitions are stolen.


GREEN BAY, Wis. (WTAQ) — Police in Green Bay are looking into a burglary at an office used by a group seeking to recall Democratic State Senator Dave Hansen.

Authorities say it most likely happened between 5 p.m. Thursday and 8 a.m. on Friday.

In an e-mail, group organizer David Vander Leest says petitions, t-shirts and a computer were taken from the office at 1136 West Mason Street.

Vander Leest also blamed the incident on the “opposition of Recall Dave Hansen.”