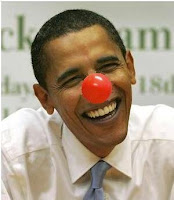 We have the mainstream media to thank for this clown being elected.


(CNSNews.com) — President Barack Obama claimed that coal could create “the kinds of air pollution” that is “creating asthma for kids,” in speaking at a town hall event in Annandale, Va., on Tuesday. However, the National Institutes of Health says that “the exact cause of asthma isn’t known” and that “asthma is different for each person.”

“The challenge with coal is that although it’s very cheap, it’s also dirty. And it can create the kinds of air pollution that not only is contributing to climate change but is also creating asthma for kids nearby,” Obama said in answer to a question about balancing deficit reduction with government spending on clean energy.

Here is what NIH's National Heart Lung Blood Institute says causes asthma.
Perhaps President Obama should check with his own National Institute of health before making a fool of himself. No wonder he believes the science of anthropogenic global warming is settled.
Posted by Bluegrass Pundit at 8:08:00 PM