Remember the white candidate who was asked for his birth certificate?

When citizens ask to see President Obama's vault copy long form birth certificate, Obama supporters and the mainstream media get outraged and accuse them of being racists. They have labeled citizens, who are concerned about the Constitution being followed, the derisive name of "Birthers". The mainstream media would lead you believe nobody would challenge the eligibility or birth certificate of a white candidate or President. Those allegations are factually incorrect. 2008 GOP Presidential Candidate John McCain's eligibility was called into question by none other than the "birthers" at the New York Times. They ran multiple stories about McCain's potential lack of natural born citizen status.


Mr. McCain’s likely nomination as the Republican candidate for president and the happenstance of his birth in the Panama Canal Zone in 1936 are reviving a musty debate that has surfaced periodically since the founders first set quill to parchment and declared that only a “natural-born citizen” can hold the nation’s highest office.

The Senate considered the issue worthy of a vote declaring John McCain is eligible to be President. Senator Barack Obama co-sponsored the resolution. 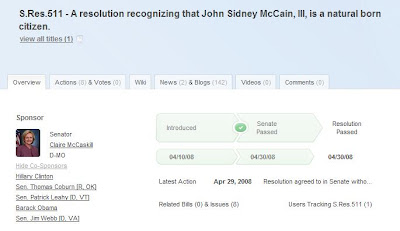 See how easy that was President Obama? Incidentally, McCain's short form was also released, but it lacked information such as the hospital McCain was born in. Obama's short form has the same deficiencies.

Were the people who questioned McCain's eligibility reverse racists? Where was the media outrage? Why is there a double standard?
Posted by Bluegrass Pundit at 5:51:00 PM

Sen. McCain released the documents allowed under law and the matter was settled. President Obama did the same thing and yet...

" Sen. McCain released the documents allowed under law and the matter was settled. President Obama did the same thing and yet..."

Allowed under the law? You are very uninformed. people have gotten long forms from Hawaii in the last year. In the last two weeks, they claimed they are not going to do that anymore. Apparently, they are covering for Obama. Follow this link and see a long form released by Hawaii in March of this year. http://www.thepostemail.com/2011/04/10/hawaii-official-and-ex-official-lie-to-cover-their-tracks/

McCain did not release this. It was released by the Republican who sued to keep him off the ballot, Fed Hollander. It turned out to be a fake.

To this day, McCain has still never released his birth certificate.