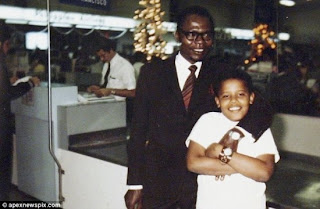 Harvard tried to get him deported.


(Daily Mail) -A memo from a University of Hawaii foreign student advisor said that Obama senior had ‘been running around with several girls since he first arrived here and last summer she cautioned him about his playboy ways. Subject replied that he would “try” to stay away from the girls.’

It also considered his earlier Kenya marriage as a grounds to deny him a visa extension but concluded that ‘polygamy was not an excludable or deportation charge’.

He is further described as ‘a slippery character’, and his relationships with ‘several women’ are discussed and investigated, while questions about his ‘marital problems’ are repeatedly raised.

Another immigration memo, from June 1964, records that Harvard officials were trying ‘to get rid of him’ and ‘couldn’t seem to figure out how many wives he had’.