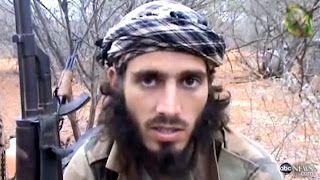 Reportedly, US-born jihadist Omar Hammami, the rapping jihadist, has been beheaded by his evil fellow jihadists.

Hammami, known as Abu Mansour al-Amriki, said he feared for his life from other al-Shabaab leaders because of strategic and ideological differences in a statement released last month.

According to Somalia’s Gedo Online, Hammami was the only one absent from a recent meeting attended by top al-Shabaab leaders in Baraawe.

Al-Shabaab reportedly hunted down Hammami after he left Marka in the Lower Shabelle region. He was reportedly beheaded on the spot and buried somewhere between Marka and Baraawe.
According to the report, the alleged execution angered some al-Shabaab leaders, who accused al-Shabaab leader Ahmed Abdi Godane of ordering the execution.

A group of foreign fighters and other top al-Shabaab members, including Fuad Mohamed Khalaf, also known as Fuad Shongoole, reportedly fled to the Galgala Mountains following the news of the execution.