Obama at Cartagena Summit: "part of my job is to scout out where I may want to bring Michelle back later for vacation" 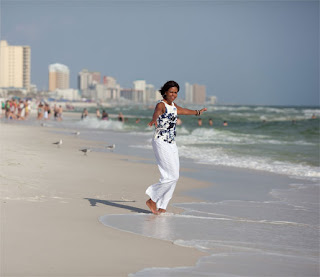 Obama has his priorities...


(CNSNews.com) — Just two days after President Barack Obama gave a sharply edged response to news anchor Larry Conners of KMOV in St. Louis after Conners had asked the president about Americans who “get frustrated and even angered when they see the first family jetting around [to] different vacations and so forth,” Obama told a panel at the Summit of the Americas in Cartagena, Colombia that part of his job there was to scout out locations for a future vacation with First Lady Michelle Obama.

Obama was speaking on a panel with Colombian President Juan Mauel Santos and Brazilian President Dilma Rousseff when he made the remarks. The panel was moderated by Chris Matthews of MSNBC.

“I want to thank President Santos and the people of Colombia for the extraordinary hospitality in the beautiful city of Cartagena,” said Obama. “We’re having a wonderful time. And usually when I take these summit trips, part of my job is to scout out where I may want to bring Michelle back later for vacation. So we’ll make sure to come back sometime in the near future.”. . .