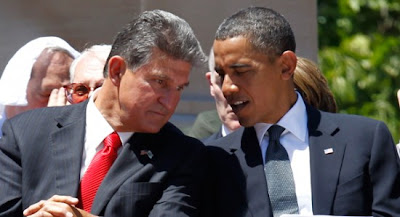 Democrats are avoiding President Obama like he has the plague. Senator Joe Manchin (D-WV) claims he hasn't decided to vote for Obama this year. Manchin saluted and voted for Obamacare when Harry Reid and Barack Obama called on him. He has no credibility and should be tossed for office this November.


Sen. Joe Manchin, D-W.Va., who has done more than any other Democrat up for reelection this year to distance himself from President Obama, said he does not know if he will vote for Obama or presumptive GOP nominee Mitt Romney in November.

“I’ll look at the options,” Manchin said this week. The last three years “have made it pretty rough” for his state, he said.

That stance is at odds with almost every other Democrat who is up for reelection this year or is from a state that Romney is likely to win. And it’s an indication of the unique effort Manchin has made to establish his independence from Obama and other Democrats. The senator has regularly used floor speeches and closely watched votes to, as he puts it, “respectfully” highlight differences with Obama, especially on environmental issues. He said Obama has never called him or sought a one-on-one conversation.

Manchin said his own vote will depend on how his constituents view the contest.