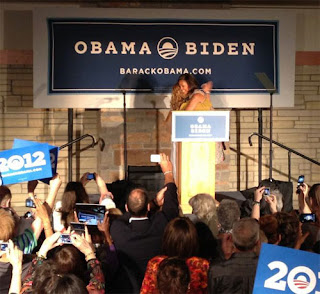 CeCe Ibson was asked to share her story as an introduction to a Michelle Obama speech Tuesday in Windsor Heights. She talked about losing her health insurance when she lost her job as a lawyer two years ago. She bought private coverage for her two children, she said, but could not find it for herself.

“No one would insure me because of my pre-existing conditions. No one. Until President Obama stood up for me and millions of Americans like me across Iowa and across the country,” she said.

In fact, Ibson’s current coverage is provided by HIP Iowa, a state program for people whose health problems make them ineligible for most commercial insurance. HIP Iowa was created in 1987, during Republican Terry Branstad’s first stint as governor. Most of the program’s subsidies come from fees paid by commercial insurers.

Ibson did not qualify for a similar program created last year under the president’s health reform law. That program, HIP Iowa-Fed, offers significantly cheaper premiums than HIP Iowa, but it is open only to people who have gone without insurance for at least six months. Critics say that rule has tamped down enrollment in the new federally financed program, which has signed up about 300 Iowa members.