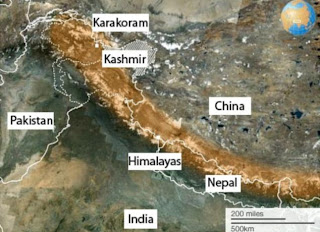 In spite of what global warming alarmists would like you to think, some glaciers are growing.


Photos taken by a French satellite show glaciers in a mountain range west of the Himalayas have grown during the last decade.

The growing glaciers were found in the Karakoram range, which spans the borders between Pakistan, India and China and is home to the world's second highest peak, K2.

The startling find has baffled scientists and comes at a time when glaciers in other parts of the region, and across the world, are shrinking.

French scientists from the National Centre for Scientific Research and the University of Grenoble, were forced to rely on satellite images, to study the region - because much of the Karakoram range is inaccessible.

They compared observations made in 1999 and 2008 and found a marginal mass increase.

They estimated the glaciers had gained between 0.11 and 0.22 metres of ice each year.