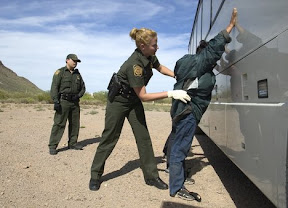 Of course, we will have to wait for the decision, but it doesn't look like the Supreme Court is going to agree with Obama's immigration law claim.


Supreme Court justices took a dim view of the Obama administration’s claim that it can stop Arizona from enforcing immigration laws, telling government lawyers during oral argument Wednesday that the state appears to want to push federal officials, not conflict with them.

The court was hearing arguments on Arizona’s immigration crackdown law, which requires police to check the immigration status of those they suspect are in the country illegally, and would also write new state penalties for illegal immigrants who try to apply for jobs.

The Obama administration has sued, arguing that those provisions conflict with the federal government’s role in setting immigration policy, but justices on both sides of the aisle struggled to understand that argument.