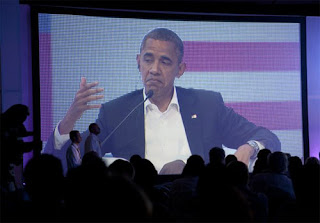 Isn't it inappropriate to go overseas and criticize your fellow Americans? What would democrats think if Mitt Romney did this?

“We now have a Republican nominee who said that the Arizona laws are a model for the country. . . and these are laws that potentially would allow someone to be stopped and picked up and asked where their citizenship papers are based on an assumption,” Obama told Univision during an interview in Cartagena, where the president is attending the Summit of the Americas.
The three-day trip gives the president an opportunity to showcase his interest in the region and court Latino voters back home, whose support will be crucial in the upcoming election. Obama won a majority of the Latino vote in 2008 and his campaign is hoping for similar results come November.