No surprise here. Sen. John McCain reportedly knew about it and lacked the cahones to do anything.


John McCain’s 2008 campaign staff allegedly had evidence that Democrats stuffed ballot boxes in Pennsylvania and Ohio on election night, but McCain chose not to pursue voter fraud, according to internal Stratfor emails published by WikiLeaks.

In an email sent on November 7, 2008, and titled ” Insight – The Dems & Dirty Tricks ** Internal Use Only – Pls Do Not Forward **,” Stratfor vice president of intelligence Fred Burton wrote:

1) The black Dems were caught stuffing the ballot boxes in Philly and Ohio as reported the night of the election and Sen. McCain chose not to fight. The matter is not dead inside the party. It now becomes a matter of sequence now as to how and when to “out”.

In an email sent two days earlier and titled “Insight - McCain #5 ** internal use only – Pls do not forward **,” Burton wrote:

After discussions with his inner circle, which explains the delay in his speech, McCain decided not to pursue the voter fraud in PA and Ohio, despite his staff’s desire to make it an issue. He said no. Staff felt they could get a federal injunction to stop the process. McCain felt the crowds assembled in support of Obama and such would be detrimental to our country and it would do our nation no good for this to drag out like last go around, coupled with the possibility of domestic violence. 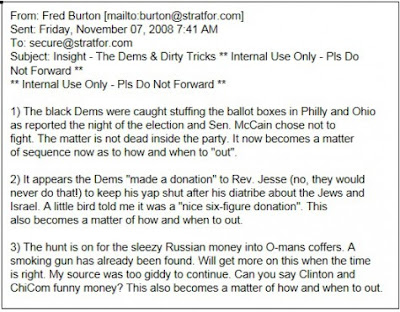