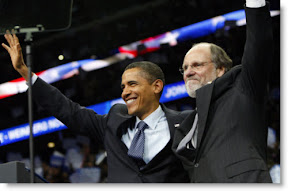 
Barack Obama’s reelection campaign has released the most recent list of names of fundraising bundlers. On that list is Jon Corzine, the former governor of New Jersey and embattled money man, the former head of MF Global:

“MF Global and its brokerage sought Chapter 11 bankruptcy after a $6.3 billion bet on the bonds of some of Europe’s most indebted nations prompted regulator concerns and a credit rating downgrade. Corzine quit MF Global Nov. 4,” Bloomberg reported.