Black Clergy on Obama's Gay Marriage Flip-Flop" "...a declaration of political war against the venerable institution of marriage.” 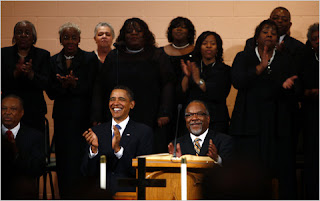 Has Obama demotivated his most loyal base?

Bishop Harry Jackson, senior pastor at Hope Christian Church, is leading a coalition of 176 religious leaders against President Barack Obama’s declared support for gay marriage and the repeal of the Defense of Marriage Act.

“We want to know whether he is going to use the bully pulpit of the presidential office to absolutely erase the image of biblical marriage from the face of the earth,” said Jackson at the Capitol on May 24.

“Voters need to know whether they have a friend or an assent, an enemy to an institution that God has ordained,” he added. “Some of us have taken his statements as a declaration of political war against the venerable institution of marriage.”

“In the African-American community, many people are saying they made him do that, we don’t understand why he did that,” said Jackson. “We don’t believe that really was the president’s intent. Others have given high fives in the backroom saying, ‘he got paid.’ We don’t really know what the intent of the president is except that we know that is not just an isolated incident. Some further action will follow.”