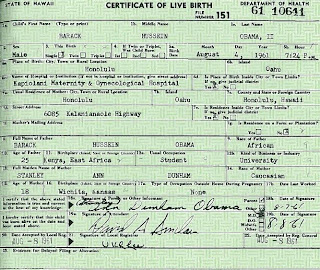 So far, Hawaii has failed to comply.Many experts claim the birth certificate image released by Obama is an assembled document and likely fraud, not an original unaltered scan of a document. The long form birth certificate Obama released is posted above. You know, the one he claimed for three years did not exist.


WASHINGTON -- In a revival of the controversy surrounding President Obama’s Hawaii birth certificate, a state official in Arizona says it’s “possible” that he’ll hold Obama’s name off the Arizona ballot if Hawaii officials don’t send him confirmation that the president was born there.

Arizona Secretary of State Ken Bennett, a Republican who is exploring a 2014 race for governor, says he waded into the issue after receiving more than 1,200 emails from people requesting that he verify Obama’s birth in Hawaii before placing the president’s name on the 2012 ballot.

“First of all, I’m not playing to the birthers,” Bennett said in a radio interview with KFYI radio host Mike Broomhead. “I’m not a birther. I believe that the president was born in Hawaii -- or at least I hope he was.”

“But my responsibility as Secretary of State is to make sure that the ballots in Arizona are correct and that those people whose names are on the ballots have met the qualifications for the office that they’re seeking,” he said.

Here is what I found most interesting about Sheriff Joe Arpaio's 'Cold Case Posse' findings. Here is the full video.
Posted by Bluegrass Pundit at 9:04:00 PM

You know what I find really funny?

The Black Panthers intimidate voters at the polls, and the prosecutor thinks he has an open and shut case. The Justice Department drops the case. Sheriff Arpiao tries to enforce immigration law in his state, and the Justice Department sues him. Then we find out about Fast and Furious. Eric Holder is a crook.