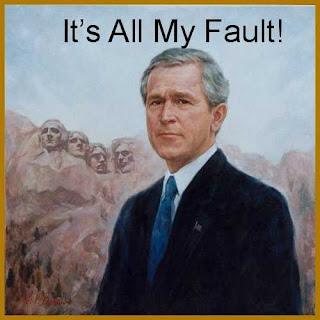 I wouldn't be surprised if Obama has edited the portrait of Bush(above.)


This ought to be fun. Barack and Michelle Obama will welcome The Most Evil Man in the World (or as he's known outside the Democratic Party, George W. Bush) and his wife Laura to the White House next week, for the unveiling of their official portraits. Of course, this comes as the current president is in full campaign mode, and W. occupies the role of Obama's eternal scapegoat. It'll be no minor miracle if Obama can make it through the unveiling without blaming Bush for something.

If nothing else it will be an interesting contrast, a truly good President and a failed President.