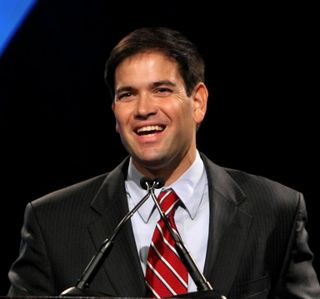 Having a young well spoken Hispanic as Romney's running mate must scare the heck out of democrats.

“Marco Rubio is a nice guy, but not someone who, I think, belongs on a national ticket — for a lot of reasons,” Wasserman Schultz said yesterday on Newsmakers. As for whether he could help Romney win Florida, she said that “in the polling that I’ve seen recently [Rubio] doesn’t really make much difference; in fact in some cases [he] actually hurts Mitt Romney, or does very little.”

Rubio is NOT a natural born citizen of the US..yes, he was born here, but his parents were not citizens of the country.