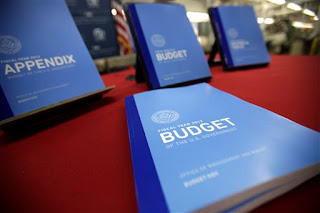 House Republicans have already forced a vote on Obama's budget. It lost the House 414-0. No democrat in Congress will support the President's budget plan.

Coupled with the House’s rejection in March, 414-0, that means Mr. Obama’s budget has failed to win a single vote in support this year.

Republicans forced the vote by offering the president’s plan on the Senate floor.

Democrats disputed that it was actually the president’s plan, arguing that the slim amendment didn’t actually match Mr. Obama’s budget document, which ran thousands of pages. But Republicans said they used all of the president’s numbers in the proposal, so it faithfully represented his plan. Keep on reading…