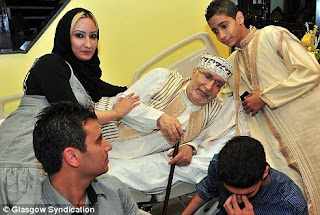 Lockerbie bomber Abdelbaset al-Megrahi was released three years ago because Great Britain wanted to make a Libyan oil deal he allegedly had only a few months to live. He has finally assumed room temperature. Let's hope he enjoys 72 goats in Hell.


Abdelbaset al-Megrahi, the only person convicted over the 1988 Lockerbie bombing above Scotland, which killed 270 people, has died at home in Libya, his brother has told news agencies.
Megrahi, 59, was convicted by a special court in the Netherlands in 2001.

He was released from prison in Scotland in 2009 on compassionate grounds. He was suffering from cancer and was said to have only months to live.

When he returned to the Libyan capital, he received a hero's welcome.

His brother Abdulhakim said on Sunday that Megrahi's health had deteriorated quickly and he died at home in Tripoli.