Who is up for putting Donald Trump on the ticket as Romney's VP? 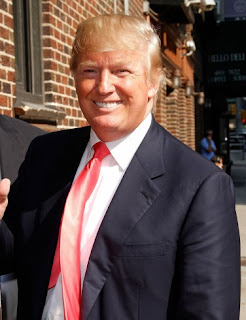 Trump is tanned, rested and ready...


(CNN) – The Donald says it's the buzz.
Asked Friday in a guest appearance on ABC's "The View" if he was interested in joining Mitt Romney's presidential ticket, Donald Trump asked, "Who would turn it down?"

Trump endorsed Romney in February, and is scheduled to participate in a fundraiser on Tuesday at his Las Vegas casino with Romney and former GOP presidential candidate Newt Gingrich.

I live in fear of that creature clinging to Trump's skull. Isn't Biden enough of a 'risible hair' VP?