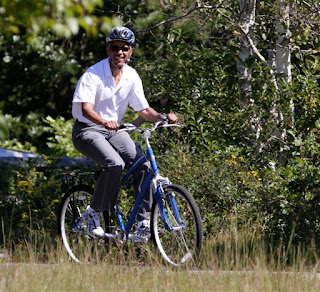 If Obama is the new masculinity, In Fifty Years We'll All Be Chicks

Via the New York Times:


[T]he key is his post-boomer leadership style. Critics are always saying that Obama is too cool and detached, arrogant and aloof. But the secret to his popularity through hard times is that he is not melodramatic, sensitive, vulnerable and changeable. Instead, he is self-disciplined, traditional and a bit formal. He is willing, with drones and other mechanisms, to use lethal force.

Normally, presidents look weak during periods of economic stagnation, overwhelmed by events. But Obama has displayed a kind of ESPN masculinity: postfeminist in his values, but also thoroughly traditional in style — hypercompetitive, restrained, not given to self-doubt, rarely self-indulgent. Administrations are undone by scandal and moments when they look pathetic, but this administration, guarded in all things, has rarely had those moments.

Rush got it right when he called Obama a "girly-man."
Posted by Bluegrass Pundit at 7:24:00 PM

How would the New York Times know anything about masculinity, anyway?