Boehner meets with Obama; says no to debt ceiling increase without spending cuts. 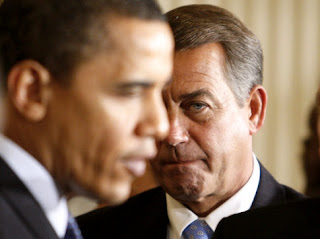 It doesn't look like Speaker Boehner's meeting with Obama was successful. He did love the sandwiches.

From  Boehner’s office via TPM:


The Speaker participated in a friendly lunch meeting today with the President and other congressional leaders. The President began the meeting by laying out some of his policy goals, including his “to-do list” for Congress. The bulk of the meeting was spent discussing other issues, including the next debt limit increase and the looming expiration of current tax rates. In a discussion of the debt limit, the Speaker – who has warned that the growing debt is hurting U.S. job creation – asked the President if he is proposing that Congress pass an increase that does not include any spending cuts to help reduce the deficit. The President said, “yes.” The Speaker told the President, “as long as I’m around here, I’m not going to allow a debt ceiling increase without doing something serious about the debt.” The Speaker also asked the President for his plans to deal with the largest tax increase in American history, which will mean tax hikes on small businesses, and the devastating cuts poised to hit our military, both scheduled to take effect at the end of the year. The Speaker pressed the President to approve the job-creating Keystone pipeline energy project.  The Speaker also asked the President to encourage the Attorney General to provide the information Congressional investigators have sought about the Fast and Furious operation.  The Speaker was very pleased with the sandwiches served.

It was good to see Boehner pressed Obama on Holder's stonewalling of  Fast and Furious documents and information.
Posted by Bluegrass Pundit at 4:36:00 AM