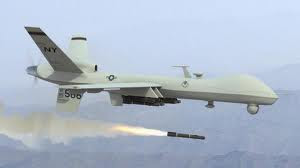 President Obama personally oversees a secret suspected terrorist kill list. He is the judge and jury. The execution is carried out by drones. Can you imagine the liberal outrage if George W. Bush had done this?


US President Barack Obama has personally overseen a top-secret process for determining which Al-Qaeda suspects should be placed on a "kill list," the New York Times reported Tuesday.

The Times, citing dozens of top officials and former advisers, said the administration had developed what it termed the "kill list" as part of a stepped-up drone war against Al-Qaeda and its affiliates in Pakistan and Yemen.

"He is determined that he will make these decisions about how far and wide these operations will go," it quoted National Security Adviser Thomas Donilon as saying.

"His view is that he's responsible for the position of the United States in the world... He's determined to keep the tether pretty short."

That's just fine; I'm sure his name appears on a couple of their lists as well. An eye for an eye, a gun for a knife, a drone for an IED.