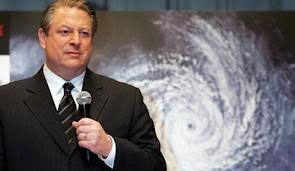 The end of the cult of catastrophic anthropocentric global warming is in sight.
Via NY Times:

IF you were looking for ways to increase public skepticism about global warming, you could hardly do better than the forthcoming nine-part series on climate change and natural disasters, starting this Sunday on Showtime. A trailer for “Years of Living Dangerously” is terrifying, replete with images of melting glaciers, raging wildfires and rampaging floods. “I don’t think scary is the right word,” intones one voice. “Dangerous, definitely.”
Showtime’s producers undoubtedly have the best of intentions. There are serious long-term risks associated with rising greenhouse gas emissions, ranging from ocean acidification to sea-level rise to decreasing agricultural output.
But there is every reason to believe that efforts to raise public concern about climate change by linking it to natural disasters will backfire. More than a decade’s worth of research suggests that fear-based appeals about climate change inspire denial, fatalism and polarization.
For instance, Al Gore’s 2006 documentary, “An Inconvenient Truth,” popularized the idea that today’s natural disasters are increasing in severity and frequency because of human-caused global warming. It also contributed to public backlash and division. Since 2006, the number of Americans telling Gallup that the media was exaggerating global warming grew to 42 percent today from about 34 percent. Meanwhile, the gap between Democrats and Republicans on whether global warming is caused by humans rose to 42 percent last year from 26 percent in 2006, according to the Pew Research Center.
Other factors contributed. Some conservatives and fossil-fuel interests questioned the link between carbon emissions and global warming. And beginning in 2007, as the country was falling into recession, public support for environmental protection declined.
Keep on reading…

A natural long-term trend is defined by a proxy factor times the time-integral of the difference between each annual average daily sunspot number and the average sunspot number for a long period (1610-1940). The net surface temperature change of all natural ocean cycles oscillates above and below this trend. The combination calculates average global temperature anomalies (AGT) since before 1900 with R^2 > 0.9 (95% correlation) and credible AGT since the depths of the Little Ice Age.

All this is quantified at http://agwunveiled.blogspot.com and sub-links.

Everything else must find room in the unexplained 10%.