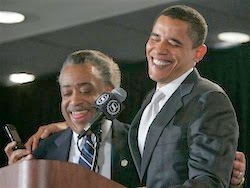 
President Barack Obama will speak at the annual convention next week run by the controversial activist and TV host Al Sharpton.
Obama is scheduled to deliver the keynote address to the organization next Friday, White House spokesman Josh Earnest said.
The annual convention of the National Action Network is being held April 9-12 in New York at the Sheraton New York Hotel and Towers.
“The 2014 NAN national convention will address issues of civil rights and social justice including, gun control reform, education, health and wellness, economic justice and much more,” the organization’s website says. “The Convention will kick of with NAN’s annual Keepers of the Dream Award Gala in New York City.”
Keep on reading…