CIA confirmed there was no Benghazi protest one day before Susan Rice misled the American people... 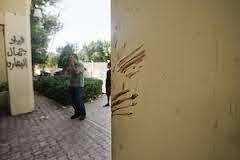 I am being nice when I use the term "misled."

Before the Obama administration gave an inaccurate narrative on national television that the Benghazi attacks grew from an anti-American protest, the CIA’s station chief in Libya pointedly told his superiors in Washington that no such demonstration occurred, documents and interviews with current and former intelligence officials show.
The attack was “not an escalation of protests,” the station chief wrote to then-Deputy CIA Director Michael J. Morell in an email dated Sept. 15, 2012 — a full day before the White House sent Susan E. Rice to several Sunday talk shows to disseminate talking points claiming that the Benghazi attack began as a protest over an anti-Islam video.
That the talking points used by Mrs. Rice, who was then U.S. ambassador to the United Nations, were written by a CIA that ignored the assessment by its own station chief inside Libya, has emerged as one of the major bones of contention in the more than two years of political fireworks and congressional investigations into the Benghazi attack.