Obamacare to cost large employers $4800 or more per employee... 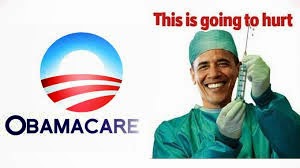 Higher prices for goods and services will be passed on to you and me...


Large employers are looking at up to $186 billion in Obamacare costs over the next decade, according to a report released Wednesday.
The American Health Policy Institute, an industry-run group, estimates direct and indirect Obamacare costs will cost companies with 10,000 or more employees between $151 billion and $186 billion over the next ten years.
That amounts to$4,800 and $5,900 in additional costs per employee.
The study, authored by former deputy Health and Human Services Secretary Tevi Troy and the institute’s chief economist Mark Wilson, found that businesses will have to adjust their services due to the costs.
“Cost increases in the range of $163 million to $200 million per large employer over the course of a decade will not be overlooked by CEOs, CFOs, or Boards of Directors,” the authors conclude. “Employers have a significant incentive to make fundamental changes to their health offerings as a result of the ACA.”
Keep on reading…