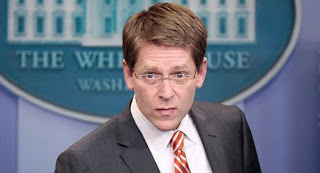 Apparently, democrats bills that pass Congress with fewer votes that Republican bills have a strong majority. GOP bills; not so much.

“A majority passed [the health care law], Ed,” said visibly-frustrated White House Press Secretary Jay Carney. Fox News’ Ed Henry was grilling Carney after the press secretary said “no,” the Ryan budget — which passed the House with nine more votes than Obamacare received — did not have “a strong majority” of support.