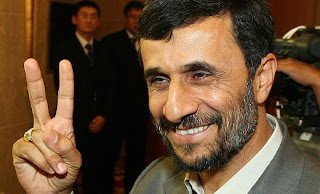 Mahmoud Ahmadinejad's dream of nuking Israel is getting closer.


VIENNA – Inspectors have located radioactive traces at an Iranian underground bunker, the U.N. atomic agency said Friday -- a finding that could mean Iran has moved closer to reaching the uranium threshold needed to arm nuclear missiles.

In a report obtained by The Associated Press, the International Atomic Energy Agency said it was asking Tehran for a full explanation. But the report was careful to avoid any suggestion that Iran was intentionally increasing the level of its uranium enrichment, noting that Tehran said a technical glitch was responsible.

Analysts as well as diplomats who had told the AP of the existence of the traces before publication of the confidential report also said the higher-enriched material could have been a mishap involving centrifuges over-performing as technicians adjusted their output rather than a dangerous step toward building a bomb. Read more here...

I'm on the political left & even I think that guy's a dangerous crackpot who needs to be stopped. Iran should never be allowed to become a nuclear power while those crazy Shiite mullahs are in charge. I once ran into a Persian who was our taxi driver back from the Roosevelt Hotel after New Year's Eve celebration, & he told me, "The only good mullah, is a dead mullah."