Change: Only 64% of unmarried women, minorities, and younger voters plan to vote in 2014 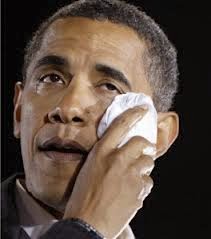 Prepare of a GOP landslide...


A new poll conducted by a Democratic pollster is warning of potential impending disaster for Democrats in this year’s midterm elections because of a familiar problem — diminished turnout among voters on whom they are reliant.

The Washington Post’s Greg Sargent got an early look at the poll, which was conducted by Democratic pollster Stan Greenberg of Democracy Corps for Women’s Voices Women Vote. The poll found that voters in the so-called “Rising American Electorate” — unmarried women, minorities, and younger voters — are much less likely to vote this year than in 2012.

The disparity is key. In the “Rising American Electorate” (RAE), 64 percent of those who voted in 2012 said they are “almost certain” to vote again this year. Among voters in the “non-RAE,” that number jumps to 79 percent.

Email ThisBlogThis!Share to TwitterShare to FacebookShare to Pinterest
Labels: 2012, democrats