How did Kentucky get to those Obamacare numbers Reid taunted McConnell with? 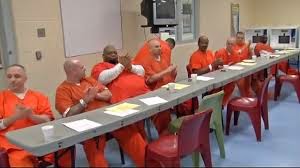 We have already determined 80% of Kentucky's sign-ups were for free Medicaid. Democrats in Kentucky helped that number by signing up inmates as they were releasing them.

After three months in jail on a theft charge, Vincent Garcia had prepared last week to collect his wallet and keys and turn in his orange scrubs upon release.
But the 26-year-old will leave jail with something else — free health insurance.
Louisville Metro Department of Corrections last week began holding daily sign-ups for exiting inmates, and Garcia was among those qualifying for the newly expanded Medicaid under the Affordable Care Act.